“I give you this to take with you: Nothing remains as it was. If you know this, you can begin again, with pure joy in the uprooting.”
-Judith Minty

As most of you know, I’ve been staying in my friend’s basement this summer while I got a job and settled myself on the seacoast. From the beginning I’d planned to be out of the house by August 1st and as my move date got closer I wondered why I wasn’t getting more panicked about finding new digs. As long as I have a vehicle I never have to worry about a home.

I adore my friends, but it’s certainly time for me to be moving on. My friends want their house back and I want to be able to come and go freely without worrying about waking people up or not having a house key.

So, on Wednesday I’m moving back into the Jetta! I miss it a lot so I’m pretty excited, though I still need to join a gym so I can shower. I’m not going to be able to go all winter like last year, so I found an alternative. I put out an add on Craig’s List for eight people who want to find a super cheap apartment. Housing is expensive on the seacoast, but the bigger the house the cheaper rent gets. Within fifteen hours I had ten people who wanted to get a place by September 1st.  Pretty cool people too; like bartenders, engineers, college grad students, and teachers. This could turn out really good or really bad. Stay tuned!
From the Desk of Ash Nichols 5 comments:
Email ThisBlogThis!Share to TwitterShare to FacebookShare to Pinterest

“A truly great book should be read in youth, again in maturity and once more in old age, as a fine building should be seen by morning light, at noon and by moonlight.”
-Robertson Davies 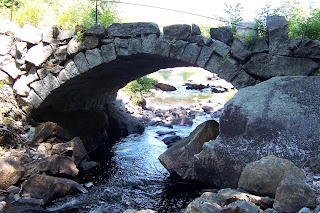 Sarah is one of my very best friends (you may remember that we were going to move to New Orleans together). This summer she's working at a farm near Keene NH so yesterday morning I drove up to see her.

It was so much fun! The farm she's at looks great and we sat in the yard drinking moskato and chatting. That's pretty much our thing: give us a bottle of wine and we can talk for hours. 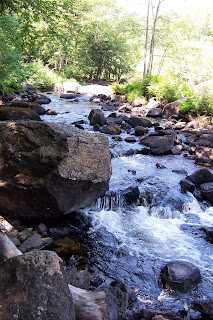 Unfortunately all good things must end, so I headed back to the seacoast after only a three hours visit. Despite the 2+ hour drive ahead of me (or maybe because of it), I couldn't help stopping at this state landmark. What makes these great old bridges awesome is that they were built with no mortar, just good planning and gravity.If you're in the area it's a nice little break from the scenic one lane highway views, so pull over and dip your toes in the water.

I also stopped at Chesterfield Gorge, but left when I realized it was just two hills with water running between them (that's also why there are no pictures of it). Yes, by definition the sign was accurate, but I feel like this particular stream was being slightly misrepresented. 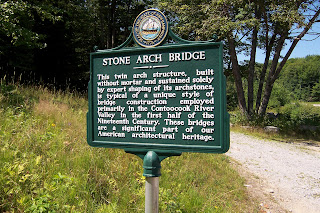 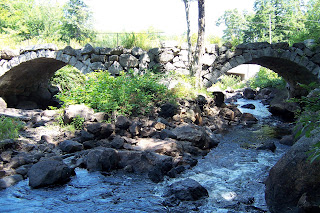 From the Desk of Ash Nichols 2 comments:
Email ThisBlogThis!Share to TwitterShare to FacebookShare to Pinterest

“We love the things we love for what they are.”
-Robert Frost

Among the many emails waiting for me after my week long internet hiatus, there was a quick note from a woman asking for the story behind my quotes. 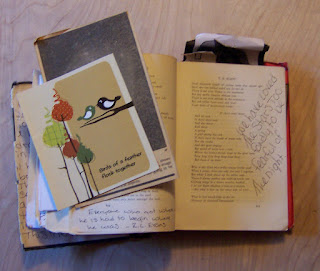 I am a collector of quotes, if there can be such a thing. This is a picture of a book I've had for a very long time. Actually I got it when I was thirteen so I've had it for about fifteen years, which is a long time to me. It's a first edition of the Oxford Book Of American Verse, but, as you can clearly see, I have not treated it as a sacred first edition. In fairness it wasn't pristine when I got it, but that doesn't matter because it has become something much more than a book of poetry.

As any reader can tell you, different books mean different things at different points in our lives. A novel you could not wrap your head around at nineteen suddenly speaks to you at twenty four or, vice versa, a poem you hoarded in the midst of your teenage angst is a stranger in your thirty. When I was given this book at thirteen, one of many dropped at the foot of my bed by my mother, I flipped through the pages and discovered Carl Sandburg. He was honest, human, and sounded like smoke stacks and narrow streets. I needed that as a teenager and his poems became anthems that I memorized and repeated to myself. I also began writing particularly good quotes in the margins, next to Sandburg's lines about mobs and, as "the years  ticked off their say so", I kept finding new poems and new authors, writing down quotes from others along side them as well. By my late teens I'd found Whitman ("And whether I come to my own tomorrow or in ten thousand or ten million years I can cheerfully take it now or with equal cheerfulness I can wait") and in my early twenties I discovered Randell Jarrell ("In bombers named for girls, we burned the cities we had learned about in school-- till our lives wore out"). Each time I picked the book up there was a poet that I had skimmed over and a poem just right for the mood I was in. 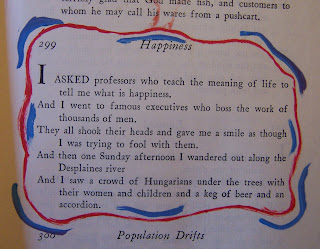 The book has been everywhere with me. In every apartment, on every major trip, trucked around in backpacks, stuffed into glove compartments. There are pictures pasted inside and the cover feels like it might turn to dust. It's now held together with duct tape and some of the original quotes I wrote fifteen years ago have almost rubbed off, but it is a more honest history of my life than any journal I've kept.


Side Note:
When my sister and I were living in Oregon we came up with a game that provided us with free drinks a few nights a week. There was a chalkboard next to the pool table and we would start writing quotes on it. Some guy would inevitably try quoting Bob Dylan or the Dalai Lama and we would bet them that whoever ran out of quotes first would pick up the others bar tab. We never lost, though some would overuse song lyrics and others couldn't site the author. I served us better than betting on our pool skills.
From the Desk of Ash Nichols 1 comment:
Email ThisBlogThis!Share to TwitterShare to FacebookShare to Pinterest

Don't say you don't have enough time. You have exactly the same number of hours per day that were given to Helen Keller, Pasteur, Michaelangelo, Mother Teresa, Leonardo da Vinci, Thomas Jefferson, and Albert Einstein.
- H. Jackson Brown Jr.

Do Not Be Alarmed! I'm still here and have gotten through most of my summer in New Hampshire relatively unscathed. There are a few reasons I haven't written lately: the first is that I've been really busy with work and the second is that my hosts turned their internet off. So here I am, sitting at the library catching up on all the emails (43), bills (4), and book club updates (3).

With all due respect to the above quote, I need more hours in the day! I'm still broke (but working) and will soon be leaving my friend's home and striking out on my own again. I want to move back into the Jetta, but my father is less than thrilled about the idea. He wants me to aim bigger, like a camper. The problem there is that a camper costs money and rig to haul it costs money (I'd sell the Jetta) and the place to park it costs money. What's the one thing I don't have? Money! (and time... oh shush!).

Against my better judgment I looked into apartments and found that they are way out of my price range. Really they're only $500/month with roommates, but after living the mobile life I find that hard to justify. That leaves option C (I think we're at C): A van of some kind that is cheap, can be converted, and can blend in. Did I mention the Jetta failed inspection? I need $150 worth of wires and plugs to keep her on the road.

So be patient folks! I'm still here and will be sending along more updates soon as I find a new place to live and struggle with preschool education...
From the Desk of Ash Nichols 4 comments:
Email ThisBlogThis!Share to TwitterShare to FacebookShare to Pinterest 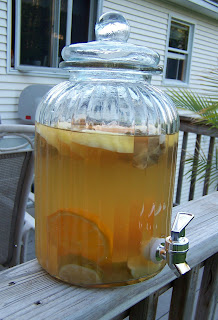 Would you like to know why I'm always broke? Yes, right now it's due in part to my not having a job for a month, and also, of course, because I choose lines of work that pay next to nothing.

Anyway, one of the reasons I'm always broke is because at any given time I have twenty things I would love to do if only I had the money. One of those many things is brewing tea/wine/beer and, of course, now that I've been paid I came across a glass jar for $10 and just had to get it. Right now I'm brewing citrus sun tea (which is tasting mighty awesome) but have grand plans for vodka infusions, sangria, and a bunch of slow meld wildflower teas.

On a completely different note, I've had Watching You Watch Him by Eric Hutchinson in my head all day. Although it's awesome summer music, I'm worn out.